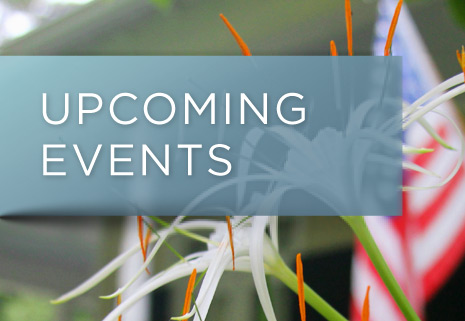 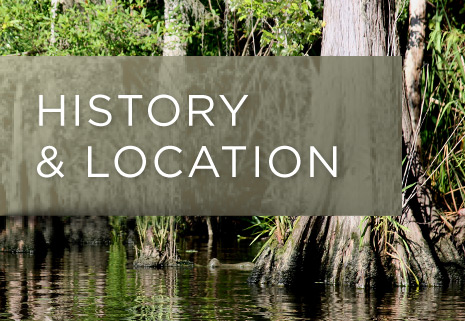 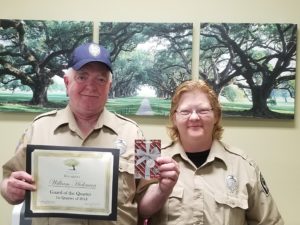 We are pleased to announce Mr. William Hickman has been selected as the recipient of the “Guard of the Quarter” for the first quarter of 2018. Mr. Hickman has been with Vinson Guard Service and at Beau Chene for 15 months, becoming a full-time guard in June 2017. He currently works at the East Gate from 6 am until 2 pm, and at times works the outside lane at that gate from 3 pm to 6 pm.

Mr. Hickman is a Navy veteran, having guarded nuclear warheads on a destroyer and serving 3 tours overseas. Mr. Hickman said in the 6 months he has been at the East Gate, he has tried to improve service during his shift. He has noticed a general change in attitude, such that fewer residents are expressing dissatisfaction about the quality of service. He said recently when working the outside lane at the East Gate during peak traffic times, he had also been trying to alert the residents that the RFID entry system was about to go on line and that a RFID tag would be needed to use the lane.

Mr. Hickman has excellent attendance and is a consistent, reliable security officer. Please join us in congratulating him for his special recognition. William is pictured here with Chrystal Jacobs, Branch Operations Manager, Vinson Guard Service, Inc. 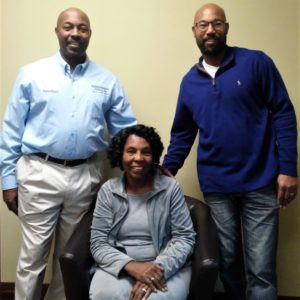 Northshore Disposal Services, Inc. (NSD) has been collecting Beau Chene’s garbage and yard trash for over 45 years! This tenure of service is not an accident, but a testament to the quality and level of service that this company has always maintained year after year. This family-owned and operated business was founded by Rodney Keys, Sr. in 1959 shortly after Mr. Keys married the love of his life, Victoria. They started servicing Beau Chene residents in 1973 when there were only seven houses built on Bocage Lane. Today, we have 1,185 single family homes and 339 condos all being serviced by NSD.

According to Rodney Jr., the eldest son, his father’s business philosophy was “Do it Right!” “Work Smart!” and “Do Quality Work!”. This work philosophy was ingrained into the family members and employees. Today, NSD is operated by the second generation of the Keys family. Rodney and Victoria had three children; Rodney Jr., Richard (Ricky) and a daughter named Robin. Robin passed away in 1986 from cancer at the age of 14. Rodney Jr. and Ricky are now the principal operators of the family business with their mother, Victoria, still performing administrative functions. Both Rodney Jr. and Ricky started working in the business during their junior high school years. Now they are both married and have families of their own. Rodney Jr. is married to Denean Trigs-Keys with two children; Robin-Renee (19 yrs. old) and Rodney, III (17 yrs. old). Ricky is married to Vanessa McKenzia Keys and they have two children as well; Raven (17 yrs. old) and Reina (13 yrs. old). 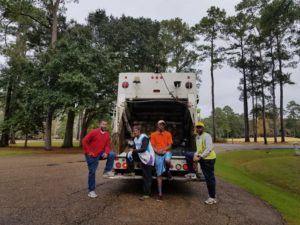 Rodney Jr. and Ricky are maintaining the high quality of service by training their employees with the same work philosophy as their deceased father trained them. Their level of commitment to their work is evidenced in every day work ethics and by consistently going above the call of duty. An amazing example of their dedication recently happened when they found a resident’s wallet in the middle of the road and brought it to our office. We contacted the resident, who did not realize she had dropped the wallet, and she was delighted to retrieve it with all its’ contents intact. Another example of service above the call of duty was when Rodney Jr. went to the dump to go through the trash to find a resident’s stock certificates and bonds that accidently got thrown out. In addition, they have gone through their trucks to retrieve a lost wedding ring and, I am sure, many other lost valuables over the years. 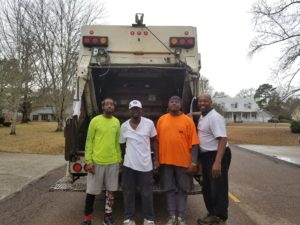 Rodney Jr. and Ricky both expressed their appreciation for serving our community. They both feel like family and have seen so many kids grow up here and now see them as adults moving back into Beau Chene with their families. Despite the recent trends in the waste disposal industry of consolidations by “big business”, NSD continues to maintain their family owned business with the highest level of personal service. We are very grateful for NSD and hope to see the business carry on through the next generation for many years to come.

We are pleased to announce the recipient of the “Guard of the Quarter” for 2nd quarter of 2017 as Kenyatta Magee. Kenyatta has been a guard at Beau Chene since August of 2014. She is usually working at the Marina Gate from 6:00 am till 2:00 pm. With her tenure, Kenyatta knows many of our residents in the Marina section of Beau Chene and greets everyone with a big smile despite her diminutive frame of only 4’9” in stature. 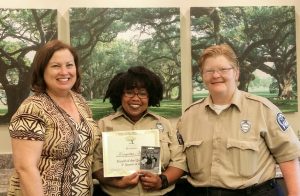 Our “Guard of the Quarter” program is meant to recognize superior performance by a security guard. Performance areas considered include:  Consistency, Communication skills, Judgement/Rationality, Reliability, Trustworthiness, and Appearance. Consistent and reliable security service is important to Kenyatta. Her husband is a nine- year NOPD detective and she has two daughters, ages 9 and 12. Family is very important to her and Beau Chene’s security needs fit in with Kenyatta’s consistent approach to her work.

When asked what would help her perform her duties, Kenyatta said having a barrier gate arm added at the Marina Gate would help her to stop and verify the visitors. Please join us in congratulating Kenyatta for this special recognition. Kenyatta was awarded a Certificate of Appreciation and a $50.00 gift card. 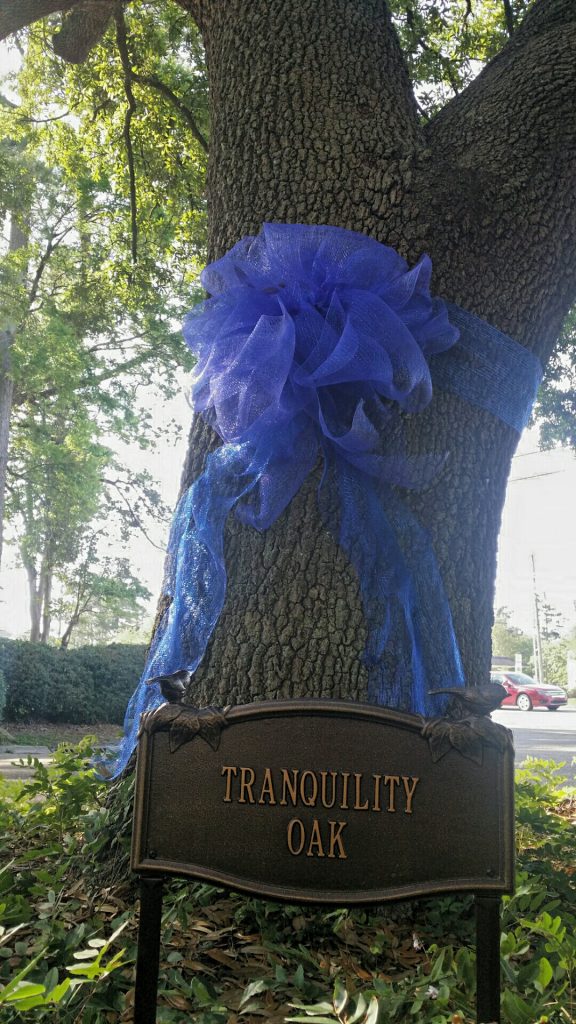 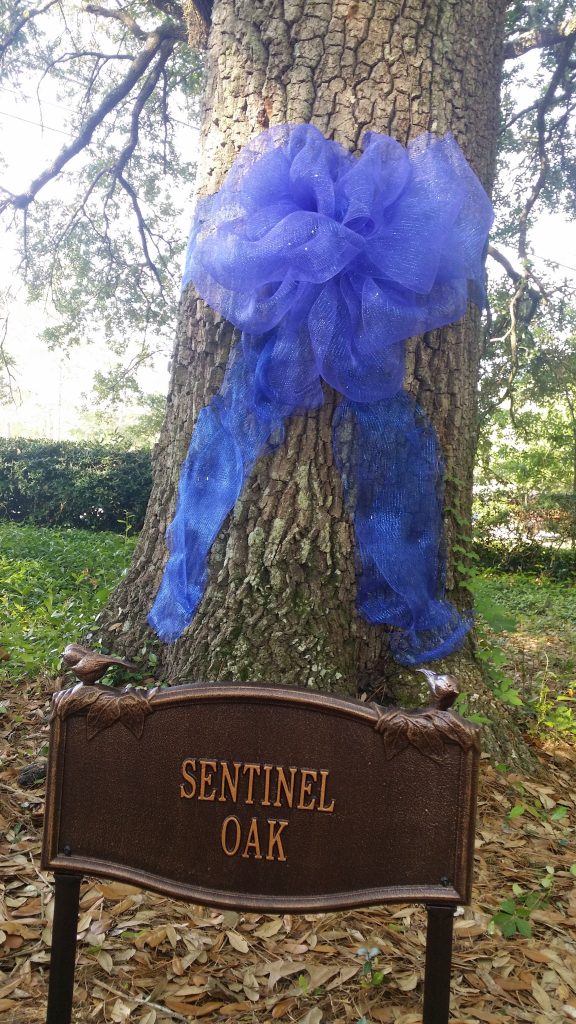 Two of the Centenarian trees along Plantation Drive were selected to each be named in honor of individuals that have contributed greatly to our association. “The Dave Vinson Oak” is located at the bend of the road on Plantation Dr. and has a girth of 17 feet.  “The Bill Maier Oak” is located west of the Plantation Dr. circle and has a girth of 16 feet 10 inches.  Dave has been working for the association and the developer, Morgan Earnest, since 1977.  He is currently the Director of Public Works and oversees all work with the water and wastewater systems, drainage, swale and road maintenance.  Bill Maier has been at Beau Chene since 1985.  Bill coordinates all Environmental Control Committee (ECC) activities, oversees enforcement of HOA rules and regulations, oversees security services and garbage & trash services for the BCHOA.

Join us in celebrating the prestigious recognition of our trees’ membership in The Live Oak Society!

The 2017 Atlantic hurricane season officially begins on June 1, 2017, and will end on November 30, 2017. According to The Weather Company, an IBM business, the 2017 Atlantic hurricane season is forecast to be less active than a year ago with the number of named storms and hurricanes near historical averages. A total of 12 named storms, six hurricanes and two major hurricanes are expected this season. No matter what the forecast says, this is a good time to start your preparations.

Beau Chene Homeowners Association has several forms of communication in place in the event that we are impacted directly by a hurricane. The Beau Chêne Homeowners Association website is www.bchoa.org.  Messages and updates will be posted to the site when access is available and on our member only Facebook page at https://www.facebook.com/groups/BeauCheneHOA/ and our public Facebook page at https://www.facebook.com/BeauCheneCommunity/

Be prepared should a hurricane evacuation be ordered by the Parish. Make sure your car is ready in the event of a possible evacuation. Make sure to map out a route before you get on the road to your destination. To be informed of current conditions in the Parish please visit their website at: http://www.stpgov.org/departments/homeland-security-emergency-preparedness 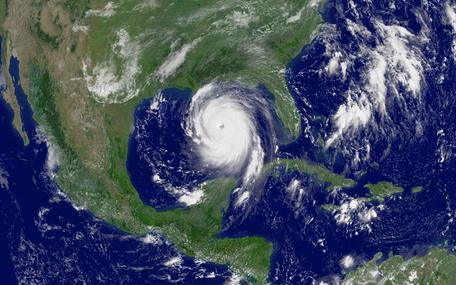 This magazine is published for our community at no cost to the Homeowners Association by N2Publishing. As a resident you will receive a copy of the magazine in the mail monthly. If you wish to learn more about the magazine you can contact Tiffany Rabb via email at: tiffany.rabb@n2pub.com 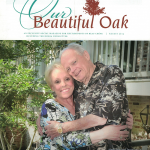 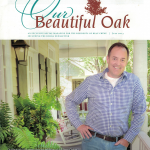 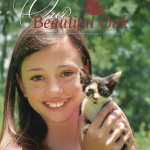 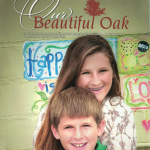 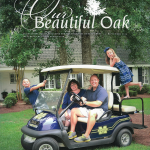